You are here: Home / Press Release 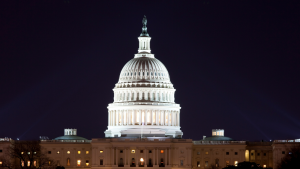 In total, the Department of Education will receive a nearly $3 billion increase over last year. Language education and international studies programs receiving increases include Title VI of HEA and Fulbright-Hays with a combined increase of $3.5 million. No less than $500,000 in the provided amount for Title VI is set to be used for establishing a Native American Languages Resource Center to be administered by the Office of Indian Education in the Department of Education. Additionally, Title III English Language Acquisition received a $34 million increase and Title II-A Teacher Effectiveness received a $27 million increase.

The vast majority of the new money will go towards Title I, which saw a $1 billion increase, and Individuals with Disabilities Education Act (IDEA), which received a $448 million increase. The final omnibus also includes $111 million within School Safety National Activities for Mental Health Services Professional Demonstration Grants and School- Based Mental Health Services Grants, an increase of $95 million over the FY 2021 enacted level, to help LEAs directly increase the number of mental health and child development experts in schools.

Although many of these programs saw only incremental increases as compared to the larger numbers originally put forward by the House this fall, we are energized by the increases and initial support and will continue our work to secure additional funding and create new sustainable pathways for equitable language and international education programs.

Below is a chart showing how key Department of Education and Department of Defense programs fared in the President’s FY22 budget, the FY21 Omnibus Appropriations Act and the FY22 Omnibus: 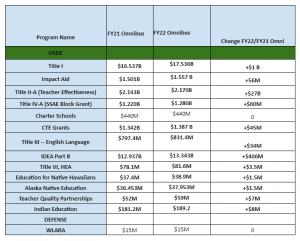 About NCOLCTL
NCOLCTL’s mission is to increase the number of Americans who choose to learn one or more of the less commonly taught languages (LCTLs) as a means of enhancing cross-cultural communication among citizens of the United States. NCOLCTL’s work focuses on the less commonly taught languages which are becoming increasingly vital to the security, economic, social and political welfare of the United States. NCOLCTL seeks to improve the teaching and learning of these languages and to make them more generally available.