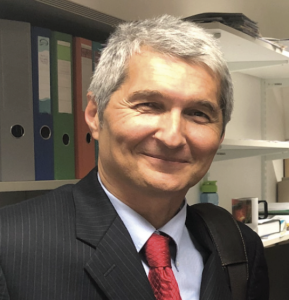 Danko Šipka is a professor of Slavic languages and applied linguistics at Arizona State University (ASU), where he teaches Bosnian/Croatian/Serbian, Polish, Slavic linguistics , and cross-cultural communication in the School of International Letters and Cultures (SILC). Sipka is the head of German, Slavic, and Romanian Faculty at ASU SILC and he leads the Language Instruction Standardization Initiative of that school. He also holds a titular (presidential) professorship conferred upon him by the president of the Republic of Poland. His previous experience includes stints at the universities of Sarajevo, Belgrade, Poznan, Wroclaw, Warsaw, the Jagiellonian University, and the universities of Munich and Düsseldorf. He has also completed research fellowships at Hokkaido University and the Australian National University.

Dr. Šipka served as a senior linguist or consultant to numerous language industry companies, such as McNeil Technologies, Microsoft, Inxight, Comprehensive Language Center, Glyph, TranExp, Avant Assessment, Franklin Electronic Publishers, Microsoft Proofing Unit and others. In these consultancies, he has performed various tasks, from assessment object development, to construction of morphological parsers and analyzers, to named-entity recognition algorithms, to developing spell checkers. He holds a Ph.D. in linguistics from the University of Belgrade, a doctorate in psychology from the Polish Academy of Sciences, and an M.A. in Russian from the University of Poznan. Šipka was a Fulbright Scholar at Universities of Illinois and Pittsburgh and a Humboldt Post-doctoral Fellow at Luwig-Maximillians University in Munich and Heirich Heine University in Düsseldorf.

Prof. Šipka is an ACTFL-certified Oral Proficiency Tester for Polish and English and a certified interpreter for the IRS, Homeland Security Department, and the Department of Justice. Sipka is currently president-elect of the National Federation of Modern Language Teachers Associations. He also chairs special interest group for less commonly taught languages at the American Council on the Teaching of Foreign Languages. He is a regular reviewer for the Department of Education and the American Council on Education. He also regularly reviews book, paper, and conference presentation submissions for various organizations.

Danko Šipka’s research interests include lexicography, lexicology, lexical and inflectional morphology, computational linguistics, and computer-assisted learning. His publications encompass over 150 papers and reviews as well as 30 books, including: Lexical Conflict: Theory and practice. Cambridge University Press, 2015, SerboCroatian-English Colloquial Dictionary. Springfield: Dunwoody Press, 2000, Dictionary of Serbian, Croatian, and Bosnian New Words. Springfield: Dunwoody Press, 2002, p. i-xii, 1-130, and A Comparative Reference Grammar of Bosnian/Croatian/Serbian. Springfield: Dunwoody Press, 2007, 1-740. Dr. Šipka has presented invited lectures and keynote talks in the United States, Poland, Germany, Japan, Austria, and Serbia. Prof. Šipka is the editor-in-chief of the Journal of Less Commonly Taught Languages. His most recent monograph is titled Lexical Layers of Identity (Cambridge University Press, 2019 forthcoming). He is married, his wife Lily is a pharmacist, with two children and one grandchild. In his free time he likes to travel and run (he has finished nine full marathons).